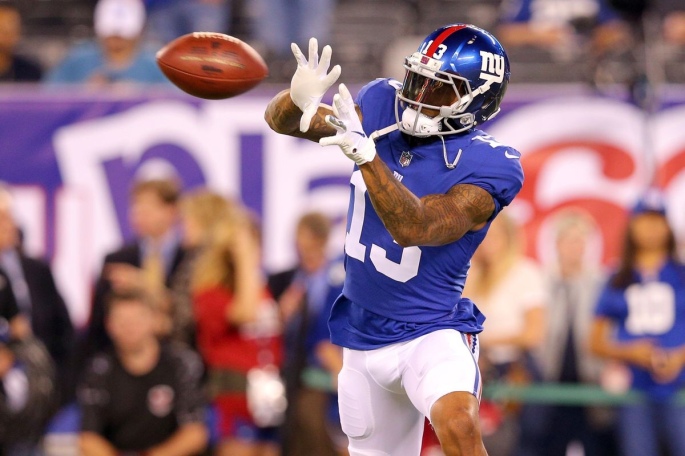 Over the past few years there has been plenty of reasons to hate the NFL & the old white guys in charge.  From owners attempting to stop players from kneeling in protest, to the commish fumbling suspensions etc the list can go on.  But I’m here to chat with you about the Odell Beckham contract situation. For those that don’t know who Odell Beckham is, he is the blonde haired, boisterous, charismatic, talented New York Giants Receiver. You may recognize him from Nike Ads & other commercials. Maybe you’ve seen him make highlight reel catches or dancing in the end zone or on social media.   All of these things are what team owners & execs love to have because they put fans in the seats & help take the public’s attn away from the leagues concussion problems, racist owners & all of those pesky domestic violence cases some players find themselves in.

HOWEVER there is a catch! (no pun intended) owners only like this type of attention & notoriety until it’s time for a guy like OBJ to get paid. I won’t bore you with all of the salary cap details because I’ll admit I don’t know every detail but I will say this. Guaranteed contracts aren’t common place in the NFL (until this off season). Team salary caps & huge injury risks being the biggest factors. Teams are only allowed to spend a certain amount on player salaries per year.  Those are just 2 reasons that make it difficult to guarantee players salary in a league like the NFL.

Odell at one point last year said he wanted to be the first player to sign a fully guaranteed deal, whether you agree with him or not doesn’t matter.  What I care more about is how OBJ wanting a much deserved contract extension is viewed as greedy selfish and a ton of other adjectives used to describe a guy who understands what his value is to a franchise.

So in the spirit of fairness, I can’t start this without mentioning somethings about Odell.  Since OBJ requested his contract extension we have seen a video of him with a young lady in a hotel room and while OBJ is eating a pizza, the young lady seems to be lining up some cocaine. Now I will admit the optics are bad, but if we were to be judged by the behavior of our friends/ family members/ or people we choose to have a 1 night stand with how many of us will still have our jobs!? That was the most extreme situation, others have been his “antics” on the field, sideline outbursts, an incident with a kicking net, and some questionable end zone celebrations. Sorry but none of that tells me he shouldn’t receive fair market value.

In any other industry he would be compensated without judgment. Not the case for OBJ! what he has been called by fans & the sports media is selfish & a team cancer. You see the picture they are trying to paint 😒. Now I understand it’s tough to feel bad for a guy that gets paid millions to play a game and is asking for MANY more millions, I’m not asking for sympathy for him more of look at the dynamic that goes on in the NFL. When you take a step back and see that players from a certain skin tone that play a particular position ***COUGH WHITE QUARTERBACKS COUGH*** are on avg paid highest in the league and don’t face the same injury risks as players that play other positions.

Lets take a look at Jimmy Garropolo (QB for the San Francisco 49ers) who signed the richest contract in the league way back in 2017. Jimmy started a grand total of 7!  yep you read that right 7 games in his career & signed a 137 Million$ 5 yr contract. Remember fully guaranteed contracts are not the norm in the NFL, only a portion of most contracts are guaranteed. So that 137 number is a bit misleading. Lets look at the important number which is guaranteed money. Jimmy with only 7 career starts is set to make 74 million $ guaranteed, and should the team not cut him before the full 5 years, he is set to make the full 137 million.  Now Jimmy is a rare and extreme case so lets look at a player with some more experience.  Enter Kirk Cousins. If you’re not a NFL fan you probably never heard of this guys name. Remember when I said fully guaranteed contracts don’t happen in the NFL? Well congrats Kirk! You got the first one (at least the only one that I know of) Mr. Cousins is set to make  84 Million over 3 yrs FULLY GUARANTEED!

So here you have 2 guys set to make a SHIT TON of money who don’t assume the same amount of injury risks as their respective teammates on the field. Let be honest here Odell is a way better receiver than these two guys are at playing quarterback. Football purists and super fans will regurgitate lines like “QB is the most important position on the field” or a personal favorite “Its the toughest positions to play in sports” while that may hold some truth we can’t over look that these guys didn’t have to fight or prove much to have teams offer these ridiculous contracts. But a guy like OBJ who has become one of the more popular players in the league as evidenced by the way fans purchased his Jersey, 8th overall in the league in 2017, Cousins was 41st and good old Jimmy G didn’t make the list. This tells me OBJ has more $ value in terms of what he brings to a franchise on & off the field.

Again it’s tough to feel sorry for athletes making millions and I’m not looking for sympathy for OBJ, just plain old fairness in how teams reached the decision to come to these contract agreements. When these QB’s were looking for their payday they didn’t have a team dig in to their social media feeds, & personal life. They didn’t have mysterious videos released insinuating that they were engaging in salacious behavior.

So the next time you hear someone call OBJ out for dancing or enjoying social media a little too much remember he is a 25 yr old kid who is just looking to be paid fairly by a team that will not think twice about ripping up the non-guaranteed portion of his contract & release him when they have used all of his athleticism and youth.

*as of today 3/27/18 The Giants are listening to trade offers for OBJ.

So for those that don’t know I (Mike) am a pretty big NBA fan.  To be a bit more specific I’m a New York Knicks Fan (I’ll wait for you to finish laughing at me!) so a topic like the playoffs doesn’t mean much to a Knicks fan. In case you haven’t heard we suck pretty bad so the playoffs are just a pipe dream for us FOR NOW!

Over the past 3/4 years it seems like the same 2 teams play for the championship, the Golden State Warriors (western conf) vs the Cleveland Cavaliers (eastern conf). Best player in the world Lebron James vs the best team in the league.  Some may say that Lebron & the Cavs have a much easier road to the championship round than teams in the western conference. I’m sure there may be some that disagree but they know! lol

See the for the casual fans that like to see the most popular players in the championship its great. But for a fan like me that watches games for the entire season. I’m more interested in seeing the 2 best teams compete for the championship. To me exciting games would bring more of the casual fans. The league already has my type of fan locked in for what seems like the entire 2 1/2 months worth of playoff games. What any league or any content creator  is looking for is growth, new viewers and new consumers.

What better way to do that than to eliminate the East vs West format and go with the best 16 teams in terms of season record.  That would ensure that in every round of the playoffs you’re seeing the very best teams compete.  Purest will say that this will never work. travel would be a nightmare with some teams having to fly cross-country several times in a 2 week span, but lets be honest these teams fly private, eat the best foods, have the best trainers and doctors. and they are making millions to play a game!

Under Commissioner Mike’s new NBA Playoff Format the match ups may look something like this.  The only terrible travel schedule looks like it may be Utah vs Washington. Don’t want to have that match up? play better during the reg season! lol